Administration represents your government's management capacity in a Territory.

The more population and distance from the capital, the harder it is to manage the territory. But it can also be improved by active policies and services in the territory such as Scribes helping in the territory's administration.

The Administration resource can be produced by the following buildings: 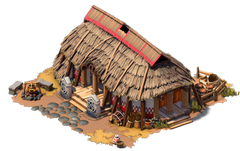 The Community Hall and the Town Hall buildings produce Administration, though only one of the buildings can be active at a given time (Depending on what the Territory Status is).

For more information, refer to the Community Hall or Town Hall building page. 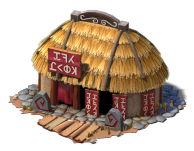 Scribes are buildings that consume either Clay or Paper to produce Administration. The base level Scribe building becomes available after researching Transaction Tracking.

For more information, refer to the Scribes page.

Administration is also consumed, they are broken down in-game into two categories, Global Factors, and Local Factors:

Going over the number of claims/territories you can have for a Hamlet/Village/Town has a large administration penalty.

Some buildings - such as the Elder's council, Tribal Council, or the Market - consume administration when built.

Administration has an impact on your ability to control territories around your Hamlet/Village/Town, as well as your income in Territories:

A weak Administration value will reduce the number of regions you can effectively control.

A weak Administration value will increase the amount of Wasted Income in the Territory.