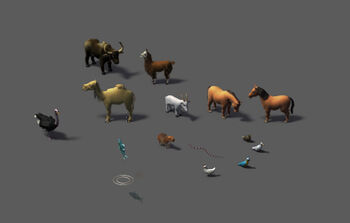 Animals in Ymir are a source of Meat and Leather and can be collected in the following methods:

While a hunter or attacking a herd provides meat and leather directly, animals in inventory form must be processed by a butcher.

The following table lists Animals available in-game, and the climates in which they can be found.

* Mediterranean, Arid, and Desert climates rely on Flax from Gathering Camps for Textile production. Cotton can also be grown in Continental climates as a more-efficient alternative to Llamas.

Eventually, finding animals to continue hunting on the worldmap becomes difficult as their numbers are depleted. Once settlements have unlocked the appropriate Knowledges, their Armies can begin capturing herds to raise as livestock on Animal Farms. After they become fully grown, you can send the animals to a Butcher to be converted into food and other materials.

For a detailed breakdown of each step, see respective the Animal Farm and Butcher pages.

Since ranch production scales with Fertility, but not Workforce, we can "measure" the overall efficiency of ranching for each animal species based on the amount of Fertility you need to produce the same materials. The following table provides a brief summary of those values:

Not all animals in Ymir get along well with porcos. There are a few additional species which can be found anywhere on the worldmap, but are treated as Barbarians that will immediately attack any units that step on their territory.