"You should always settle where you start"[]

There is no way around it, the starting tile should provide all that you need for the begining.

After settling your first city you should disable Food Rationing, then follow with mission that will pop up one after another up to the mission "First Hunt". When your units reacharge action points you can build hunter spots, then gatherer camps for basic food - ignore grapes, olives and truffles at this point, you dont need luxury food.

Early game the most important is to grow population to maximum, so keep hunting and expand your formation with extra warriors, you can disband carriers. Try to provide basic shelter for all active porcos (adult males) as they are the workforce. Keep stocking meat, make small fort (check Defense Guide for Ymir) and set priorities to your food production buildings. Keep Forced labour to a minimum keeping positive balance. You should settle a countryside next to your initial hamlet if there is source of water and food, preferably hunting spot (diagonal are also fine).

What if your starting location is bad?[]

Let's face it, your starting location might not always be what you wanted it to be. You might only have one small batch of carrots with one hunting spot, no wood, poor fertility, no ore, no defense, a small clay node, and a tiny puddle of water for your starting water source. The Random Number Generator known as, RNGesus isn't always a kind god.

Settle in your starting location anyways![]

There are significant risks involved in moving your entire rag-tag band of roving nomads that could threaten to wipe out your game before you even got a chance to start out, if you take the plunge and decide to move your entire civilization as a single unit without settling. AP regeneration isn't always high enough on certain terrains, which can result in long waiting times. There are also extremely dangerous random events that could ruin your game, such as:

So I'm stuck with my bad location?[]

No! Of course not! This game actually encourages and rewards you for exploring your surrounding vicinity. Just do it smart! When you're settling your first city, just remember to leave out about 5 piglets to act as your starting scouts: 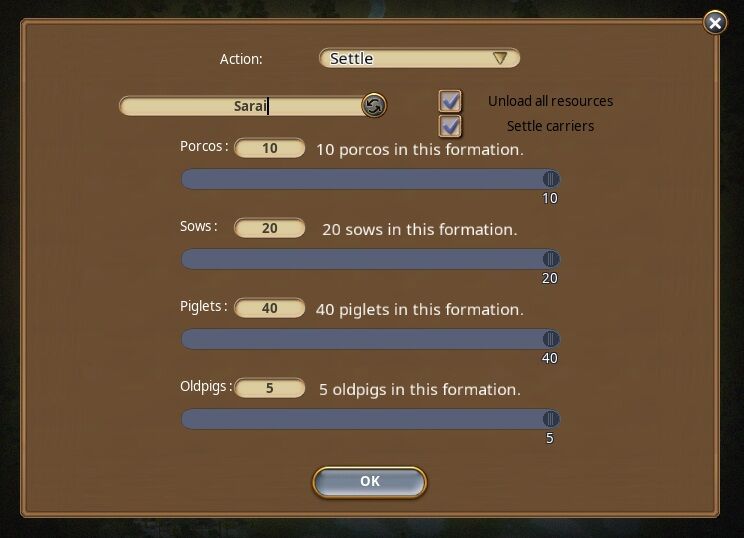 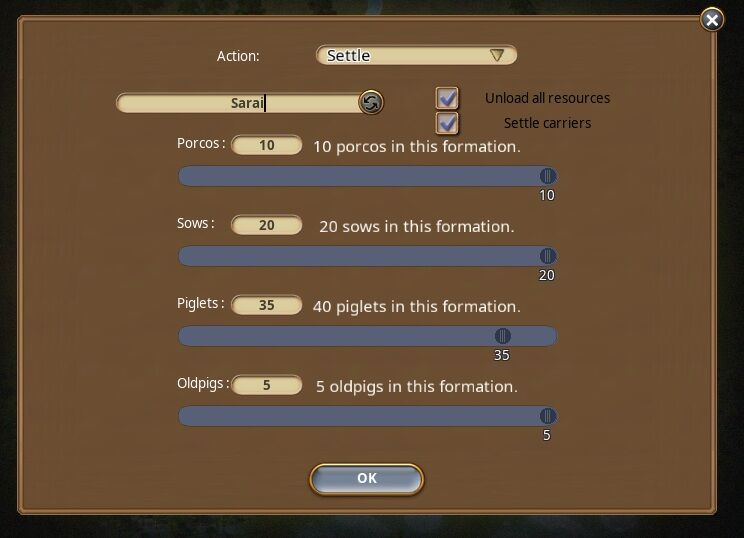 The 5 Piglets that you've left behind now serve as a free scout that won't effect your growth. Because of the size of the formation you are now resistant to the "Units inside a formation dying" event, as well as less likely to have the "Formation being entirely lost" event. Now comes the job of scouting your immediately vicinity for a good location to truly settle in.

If you settled before taking out the Piglets, or if your Piglet scouting formation died. You can always take out 5 Sows from your city, and use them to explore. Doing so still comes with the same risks, but it's generally free scouting that only slightly slows your growth down. Using your actual Porcos is risky, it slows your growth and it slows your production down substantially. Be wary that you may become extremely unlucky and lose multiple formations before you find a viable spot. If this happens, you might have to bite the bullet and sent 1 single Carrier or Porco to do your scouting. This is only optimal in the event that you run so low on sows that it effects growth too much.

The reason I don't suggest using Oldpigs for this, is due to a chance event where you might end up with the knowledge Elder's Council immediately after settling. It's not common, but it can happen, and the growth hit you take from using piglets isn't large enough to warrant waiting on an otherwise useful knowledge.

What am I even looking for?[]

The first thing you need to look for is a visible water source. A pond is sufficient as you'll be getting Wells soon enough, however you should always have at least one hunting location. That could be buffalo in Arid, rabbits in Nordic, it doesn't matter what the animal type is. You just need at least one to truly get started. Two is definitely preferred. As is the inclusion of Fish nodes.

Another thing you need to have to start out is a node of food crops. An example would be Lettuce or Apples

Often times you don't even have to scout too far to find a much better starting location than the one you began with. Everybody's preferences are different, however, there is a general consensus as to what is considered a quality start in each major biome.

I found it! My perfect capital location![]

Great job! Now it's time to evacuate your original starting location. However, there are some steps we must take to ensure that everything works out perfectly. My suggestion is to first make a new unit of about 10 to 20 carriers, and maybe 10 to 30 sows. You don't actually 'need' to do this, as your units automatically convert to Carriers when you evacuate - however, what you want to do is to wait until this new unit reaches 100 AP. This way when you evacuate your entire city, you'll merge the 0 AP units with the 100 AP units, and hopefully have enough AP left over to move a few tiles before you have to encamp or rest for AP. This is paramount if your starting location was hostile and only offers +0 AP to unencamped units. This way you can move to a more accommodating tile for a better regen rate.

Now, once you're truly good and ready. It's time to open up your city screen, and click the evacuate button.

Now you're off to the new spot! Good luck, and hopefully your tribe doesn't get the unit formation lost event before you reach your destination!

Guide Writer's note: Alternatively you could just settle the second city, transfer over the contents of your main city, and then evacuate it after you've moved most of the population. This takes much longer, but at least you won't get wiped by a freak unit formation lost event.